Update details 1.01
Football Life is our attempt to continue the offline modes of the retired PES series, football life is a heavily moded standalone football game made for offline career modes only.

SP Football Life is how we like to play a football game, it is made with the same standards as previous smokepatch contents and is built according to our guidelines to the best of our knowledge, users can read the description before deciding to use football life as everybody have their own taste and preference, see the first announcement
Main Features:
Database:
the new database used is balanced to suit football life, but it is possible to make edits using the standard edit mode, not everything can be edited, but two fully editable teams can be customized (same as in previous versions).
players' stats are similar (but not identical) to the newest efootball database.
see database reference
Addons
addons are optional features that can be downloaded and added separately, most addons are kept optional due to the large file size.

available add-ons can be accessed from the website add-ons menu above, do not add anything unless it is made specifically for football life 2023, every addon has a compatibility note.

football life will have its own compatible content, most add-ons for older smokepatch content will not work, adding mods from other sources can work but at the user's own risk so be sure to make backups.

Sider
football life includes a modified sider, sider is a tool made by juce that allows for more features and allows customization by the community.

* we will be making a tutorial for users unfamiliar with sider functions.
Gameplay
football life gameplay is modified and different, but it is also possible to use the standard PES21 gameplay by using (FL23 switcher.exe) which is located in the game folder, switch and restore by running this tool again.

Real Faces
real player faces are not included by default due to the large file size, faces from pes21 are compatible and work on football life.

to add faces users can get them from the addons menu, two versions are available: (in progress)
Faces essential pack (included around 800 faces of most famous players)
Faces mega pack (includes around 5000 faces)
Our previous face pack is also fully compatible and can be used in football life (replace files in the download folder of the game), the previous face pack is around 80% correct compared to the current database.

users who prefer to use their own face pack can add using sider or by replacing the extra empty cpk files included in the download folder of the game, players ID can be found here

master league managers (+100) have their faces included in the game by default. 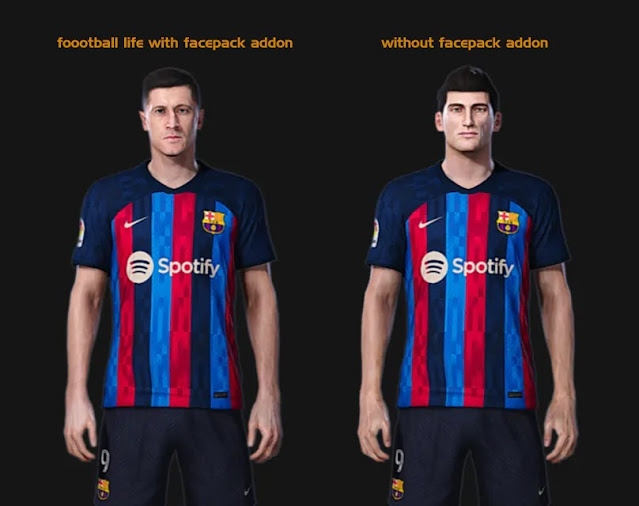 Game Commentary
A new English commentary version is included in football life, other 15 languages are also available as an optional add-on. all the commentaries are updated to the newest 2023 version.

Teams kits
all teams in football life have real kits, around 300 teams have updated kits for the new season, others have previous season kits, and more updated kits come in updates same as in previous smokepatch releases.

sider kitserver for CL badges is not yet included.

Boots
100 players' boots included, most of the boots are of recent designs, assigned randomly to all the players in the football life database.

Balls
we have moved the game balls to sider, which allows for a bigger number of available balls, also by doing that balls will load automatically in the game depending on the tournament, selecting the game ball can be done in the sider menu (space bar),

* we will be making a tutorial for users unfamiliar with sider functions.
Stadiums
SP Football Life comes with 29 real model stadiums, and 17 fake stadium models assigned to the teams, stadium model size is big, so we kept our selection in the base game to the minimum.

adding all the available stadiums can use over 100 gigabytes of the available disk capacity, users can decide to add more stadiums from our stadium's addons (in progress), but be aware of the size needed, and keep in mind that you might not play in most of them, example if you add all Italian stadiums and you play in a team in brazil, you might never see any of them in the game career, some users prefer the coach mode, which doesn't require any more stadiums.

a modified sider is included in football life by default, stadiums from pes21 can be added with ease, we will be creating a tutorial for that when the stadium's addon is released.
Background Music
football life uses a music selection from:
NoCopyrightSounds
NCS free music for content creators
all thanks for this great channel